Megan was down from San Francisco for the past few days, so we paid a visit to Dad.  I said to her before we left the house, "I wonder what Dad will be wearing today...".  You never know. 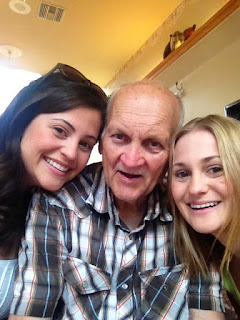 We walked into Valley View Gardens and found Dad holding a huge tennis shoe in his hand.  (Dad wears a 7 1/2 normally).  We looked down and saw that he had a sock on one foot, and a mismatching tennis shoe on the other foot without a sock.  What is going on here?

We tried taking the shoe out of his hand (which had the name Carl written inside of it), but he was adamant that it was his.  A little grumpy actually.  At this point, I'm a little annoyed because only a month ago, I bought two new pairs of velcro tennis shoes for Dad and a pair of slippers.  Why isn't he wearing his new shoes?  Or better yet... where is the mate to his shoe?

I guess what happens is that the staff is constantly washing his shoes because he either pees on them, or they begin to stink because they can't get him to wear his socks.  These shoes are from Wal-mart and are only going to hold up to so many washes in the washing machine.

We get to his room but before we can deal with the shoe situation, Dad announces he has to pee.  Megan leads him to the toilet and once he is done, she had a heck of a time getting him to wash his hands.  He kept wanting to hug Megan and said, "But you're so beautiful.  I'm so glad to see you.... etc".  Megan is repeating over and over, "Wash your hands.  Dad, let's wash your hands."  He really can't take any direction at this point.

Getting him to sit on the edge of the bed to put socks on is just as difficult, but Megan is finally able to get socks on both feet and we find the matching shoe.  She is almost about to put it on him when we realize that both shoes are for the Right foot.  Oh man.

All the while, I had been holding baby Emry and Dad finally looks at her and says, "What's up Dude?"  I find it so funny that Dad can most of the time look right through Emry like she's not even there, but then randomly notice her and blurt out whatever is on his mind.  The women residents go crazy over Emry and one kept walking up to us and asking, "How much do you want for him?"  (they all refer to her as a him).  We were cracking up because she would walk away, and then we would see her approaching again and she would throw out the same line.

Megan told Dad that it was good to see him and he answered, "it goes both ways".  Haha.  He was actually pretty funny yesterday.  As we were about to leave, we see this tall resident with only one shoe on.  We assume he is Carl.

Below are pictures from our visit with Dad yesterday.  Oh, and he has a new lady friend... 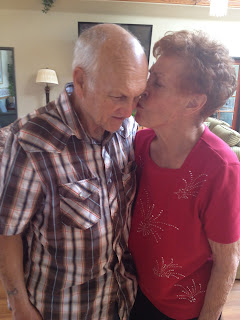 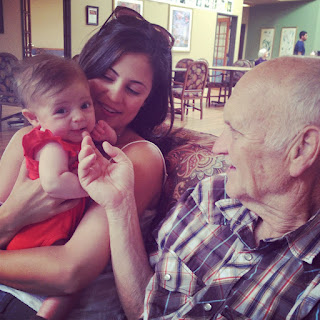 Posted by Kristen at 9:56 AM No comments:

Here we are... it's June and Dad is still living at Valley View Gardens.  Remember when we thought he would be moving out around February or March?  Sick joke.  We got through the obstacle of getting him accepted into the West Los Angeles VA Memory Care Facility, but now it's a waiting game.  All I know is that his money will get him through the end of July at his current home, so I REALLY hope he gets to move before August.  I'm hoping to get some more information this week.

Quick update on Dad's health/TB test:  Last blog I wrote that he tested positive for TB and I was worried how this would affect his admittance into the new home.  Well, his x-rays showed no trace of Tuberculosis (like we thought) and we had the doctor sign a letter to the VA explaining his results.  I felt confident that would do the trick.  Also, Dad's crazy staff infection on his wrist is mostly healed.  I'm glad we were diligent with treatment and I'm glad it's gone.

It's been very quiet on the "Dad" front lately and I've barely been over to visit him since we had the TB test done.  Happy that things have calmed down a bit.