Dad was released from his 9 year battle with Alzheimer's yesterday.

He had a fever a few days prior, so Windsor ordered more extensive labs.  They wanted to send him to the hospital but unless it was going to make him more comfortable, I was against it.  I didn't hear back about the Lab results until Saturday.  It wasn't good.  Dad's sodium levels were critically high and his vitals were dropping.  His body was shutting down.

We called Megan and she booked flights right away.  In the meantime, the nursing staff was such a calm presence.  They made sure Dad was clean and they put lotion on his dry skin.  When my Mom said her goodbyes and left, he was tucked in comfortably with oxygen in his nose.  He looked serene.

A few hours later I was at LAX picking up Megan and her boyfriend, Erik -- we went straight to Windsor and even though it was after hours, we were able to see Dad.

He was breathing much harder and had a fever.  BUT, he knew someone was there!  And he knew someone was talking to him.  His eyes moved in Megan's direction and then back to me.  We reassured him "we're here Dad" "we love you" "hang in there".  Megan hadn't seem him in this condition, so it was even more upsetting for her.  Not easy for anyone, really.

The next morning, I woke a little before 7:00 with my mind focused on Dad.  As I got out of bed ten minutes later, the phone rang.  Dad passed away at 6:56 AM.  I almost feel like I was there with him when it happened... I am so glad that my thoughts were on him during his last moments here on earth.  Even though we were expecting this, its never easy to get that call.  Such sadness, relief, and more sadness.

Megan and I went to see him one last time.  We cried and held his hand.  His little heart tattoo reminds us of his sweet, sensitive, and playful side. 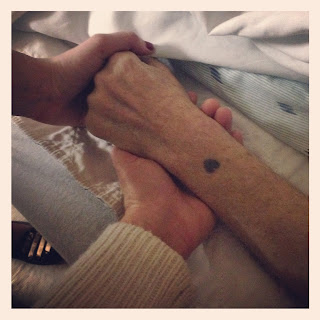 Dad, you were so brave to endure what you did.  You deserve to rest in peace now.  We love you and know we will see you again some day.  Watch over us now as we have done for you.
Posted by Kristen at 8:14 PM 9 comments: