As I made my way out of the VA hospital today, I noticed those quintessential Los Angeles palm trees, and I felt the warm sun on my back, and I could see the incredible blue sky, but I just stared straight forward and thought to myself... none of that really matters.  All that matters is my Dad -- laying up on the 4th floor in his hospital bed, arms tied to the posts, mouth gaping open, cheeks sunk in, and eyes practically rolling up into his head.
I sit here with a heavy heart today.  Alzheimer's has taken my family on such a twisted journey, that I feel like I can handle anything, and I can, but I just wasn't prepared to see my Dad looking like that today.
He was really out of it, very doped up, and almost catatonic at first.  His mouth was stuck open and since this made it impossible to form words, he just made noises.  After greeting him, I walked back out into the hallway to speak with the nurse.  I stood there waiting for her to finish with another patient and that's when the tears began rolling down my cheeks.  I dropped my head to hide my face and held in the sobs that were threatening to come out.
They paged the Doctor and I went back in to Dad's room.  He noticed that I was there and made some more noises.  I actually silently pleaded...  Why is my Dad being held hostage on this earth?  Give him mercy.  Don't make him live like this.

This morning, Dad had become agitated again, so they injected him with some medicine.  The twitching, disorientation, and gaping mouth are side effects of that injection.  I have no idea if he was like that all weekend long.  They didn't feed him lunch because they weren't sure he could swallow.

Finally I spoke with the Psychiatrist, and found out that they are moving him down to the Psych Ward this afternoon so they can begin to clear him of these strong medicines in a controlled and safe environment.  That decision brought me a little relief.  The Psychiatrist and General Doctor have both shared with me that they don't think he will be welcomed back into the VA home where he was living.  Ultimately, that is the decision of the home, so we don't know right now.  It scares me to think about what the next couple of weeks will bring, but honestly, the most important thing for me right now is to get Dad back to normal.  Whatever normal is for him these days, I have no idea.  But it definitely wasn't what I saw today.

I stayed by Dad's bedside holding his hand.  He became more and more cognoscente in the hour that I was there and even gave me a couple small smiles.  I wiped the boogers from his eye, gave him drops of water for his dry mouth, and applied chapstick to his cracked lips.  It wasn't much, but it felt good to do something for him.

Today Alzheimer's wins.  I am defeated and for the moment have no fight left in me.  I know that will change in the coming days when we have to fight to keep him in his home.

I took a picture of Dad but I feel that it's pretty disheartening, so I won't share it.  I will, though, keep it as proof of the ugly face of Alzheimer's.  Below is a picture of his restraints and of us holding hands. 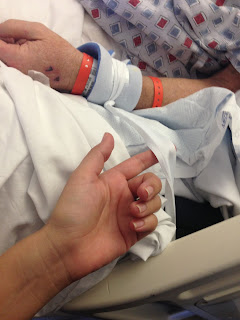 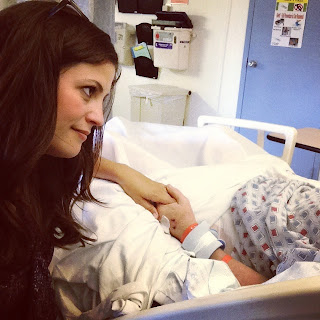