Success... in my opinion!

After my last blog, I think everyone was nervous for our Assessment at the new VA home in West Los Angeles, but I'll get right to the point... THE DAY WENT VERY WELL!  Success!... in my opinion at least.

The facility is big, clean, and brand new with wide hallways and delicious food.  Despite terrible traffic on numerous freeways, we arrived just a few minutes late and were able to get a bite to eat with some of the assisted living folks.  I got shrimp cocktail, Dad got cod with rice and veggies, and we finished off with chocolate covered bananas and strawberries!  Wow!  Oh, and Dad was eager to eat everything on his plate, so he grabbed a slice of lemon and ate it like a slice of orange.  When I looked up and saw the look on his face, I knew immediately what he had done.  Then he pointed to the lemon and stated that it was "spicy... watch out".  Hahahaha.

Our "tour" really just consisted of visiting one of the rooms.  The rooms are designed for roommates, but there is a wall down the middle of the room, so each resident has their own private area, tv, shelves and cupboards... they only share a very large closet and bathroom.  The room we saw actually had a distant ocean view.  Apparently The Memory Care area where my Dad would be living is on the 3rd floor but has a couple terraces so that the residents can spend time outside.

I was most worried about how the staff would approach Dad and how he would react.  After dealing with his current home, which is supposed to be well trained in handling Alzheimer's patients, but clearly is not, I don't trust anyone.  Well, I had nothing to worry about... because it appears that they know what they are doing there!  What a relief.  The Social Worker walked right up to Dad, spoke loud and clear, shook his hand and Dad was delighted.  He even patted the guy on the shoulder while shaking his hand.  They spoke privately in a room for about 4-5 minutes and then I was allowed to join them.  After speaking with us for a while, it almost seemed that the Social Worker was watching us with a slight sadness in his eyes at our situation.  He was seeing a 72 year old man with moderate/advanced Alzheimer's sitting with his 28 year old daughter... both in good spirits, but both obviously dealing with a very frustrating disease.

Basically the same thing happened when we saw the Nurse and the Doctor.  Dad handled all of it really well, and I answered all the questions once they realized he couldn't.

It really felt like the staff was approaching my Dad's application in the manner of 'when he gets accepted, not if', so we left with high spirits.  The only bad news, is that it could still be 3 months before the facility opens, but we're hoping it's sooner than that.

Below is a picture of us celebrating that the day went well. 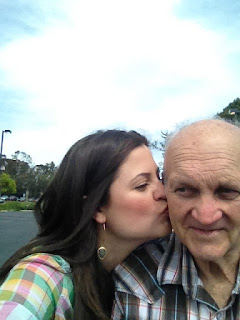 And of course, as promised... a picture of Dad with his Grand-daughter Emry! 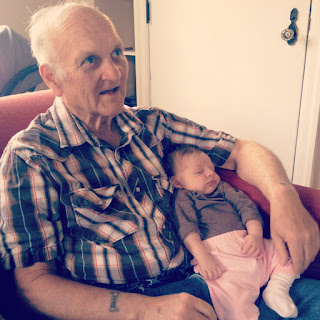 Posted by Kristen at 9:57 AM No comments:

We have some movement in Dad's ongoing future housing/financial prospects.  As I reported a couple of months ago, we had completed his application to a Veterans Association facility for Alzheimer's Patients and were waiting for the next step.  That next step is today.  The Assessment.

Dad's appointment is at 12:15 today at the new facility and will start with a tour and then end with an assessment by 3-4 different people.  We're all a little worried.  If you count from when we pick him up at Valley View Gardens to when we drop him off... this is shaping up to be a 6 hour excursion for my Dad.  (A 2 hour excursion is pushing it for someone at my Dad's level.)

The biggest worry is that the letter we received in the mail states "The assessment portion will begin at 1:00... and should be completed by 3:15.... The assessment includes sharing information with a physician, registered nurse, and social worker individually." And apparently I'm not allowed in the room with him.  Um, Hello?  What kind of answers or conversation do they think they will get from an Alzheimer's patient?  And two hours?  It's difficult to keep his attention for 10 minutes.  And I'm also worried about his mood or if he will be scared to go into a room with a bunch of strangers.  There are so many unpredictable factors that make us uneasy.

So, the truth of the situation:  this is our last hope.  It has to work.  Dad's money runs out soon, and this is the only place that will work with him financially and give him a decent place to live.  There are no other choices.  This is it.

Cross your fingers for us today.

On a personal note... Dad's Grand-daughter was born on March 10th.  Emry Phebe Hardin is beautiful and healthy and will get to meet her Grandpa today!  It's also my husband's 30th Birthday today!  We have a lot to celebrate.  Hopefully that will continue to be true after Dad's assessment. 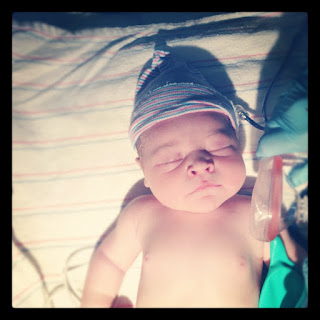 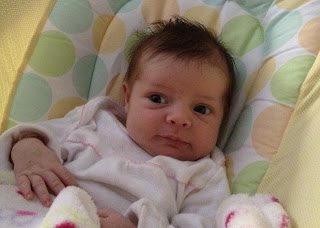