Yesterday was my Dad's last moving day ever.  He is now at his final stop... The Veteran's Home of California West Los Angeles (near Wilshire and the 405, for those of you not familiar with the area, it is just east of Santa Monica).

He was in bright spirits as we sat in LA traffic listening to Rosemary Clooney, Frank Sinatra, and Ray Charles, and continued to be happy throughout the hour and a half of paperwork.  We shared a Valentine's Day doughnut and he sipped his coffee with a pleasant smile on his face.

The entire building is beautiful, state of the art, and everywhere you look, there are huge windows with quintessential views of Los Angeles -- palm trees, greenery, hills, spanish-style buildings, and a little bit of haze of course.  On a good day, you can see the ocean and all the way to Palos Verdes from Dad's new room which is basically a square area with a hospital style bed since he is technically living within the skilled nursing portion of the housing.  But, he has a flat screen TV in his room.  Too bad, he'll never use it.

We met with the Nurses and Doctors to go over Dad's health history and his family history.  Around that time, my Mom arrived after battling for over 3 hours in LA traffic to lend a helping hand.  And by lunchtime, Dad was starting to get anxious.

I had run out to my car, and when I came back I could hear my Mom trying to pacify Dad before I even joined them in the dining room.  He was done eating, done sitting, and done being told what to do.  He kept trying to grab random silverware and plates from other tables.  As I was scarfing down my food, I suggested that they take a walk outside.  Sometimes the best thing to do is let him walk it off.  At this point, he was becoming distrustful of us and would not listen to our directions, so we were basically following him.

That's when we realized he had not received his morning meds or his mid-day meds.  After coaxing him into an elevator, we got him back up to the Doctor's office.  Since they had not written any orders for his meds, and he was not in their system yet, they could not administer the pills to him.

Originally, the entire moving process was supposed to be completed by 2:00, so instead of cancelling my afternoon performance with The Sassy Songbirds, my Mom and I agreed that she could handle the last hour and make sure he was unpacked.  So, by 1:00, my anxious and aggravated Dad had not started unpacking, had not begun his physical, and was still a few hours away from being all settled in.

With a pit in my stomach, I left the two of them there.  I think by 2:00, they administered Dad's medicine, and in the meantime tried to perform a physical on him where he fought the nurse, the doctor, and my Mom the entire time.  They finally gave up on finishing the exam.  By 3:00, the meds were kicking in and my Dad helped my Mom unpack his suitcase.  She was out of there by 4:00, and sat in two more hours of traffic before she got to my house for a quick glass of wine.

What a crazy and exhausting day.  It worries me that the staff witnessed Dad's bad side on his first day of being there.  But, they also saw how his meds do seem to regulate his moods and behavior, so that is good.  As usual, all we do now is wait.

I did read a clause during all my paperwork signing that informed me of a 60 day probationary period to make sure Dad is a good fit with the home.  I didn't ask for any details, and I hope that I never have to hear about it again.  This has got to be Dad's final stop.

The financial aspect of this entire process is very interesting (in a good way), but I will have to share that in a separate post, because it's a lot to take in.  In the meantime, here are some photos from Dad's new home: 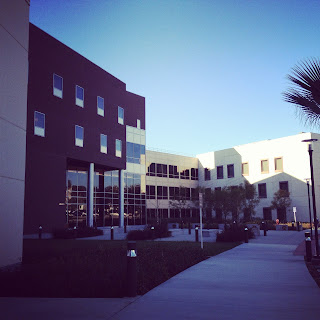 The Entrance to Dad's Home 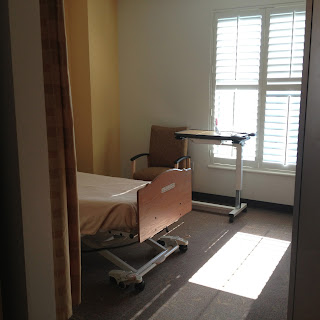 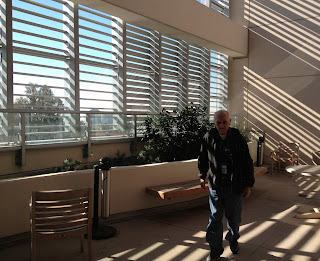 One of the outdoor spaces. 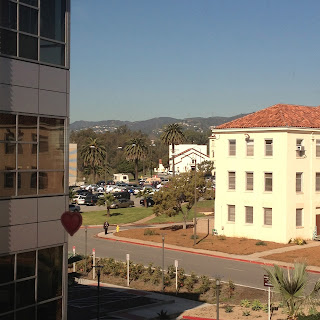