(Wish I knew what was going on in that head...)

Anyway, so many developments in the last 48 hours.  Mostly good in the sense that we have solutions to the problems for now.

I was kind of afraid to visit Dad's home alone because the Head Nurse was clearly very annoyed with me on the phone even though I did what she asked (refill the Xanax) and could do nothing more until it arrived.  In her defense, I didn't return her phone call the other day mostly because I had no news for her, but I know that added to her frustration.

Our conversation with her was a mixture of confusion and frustration on the part of all involved.  Turns out, they have Xanax.  I was so bewildered... what does she want from me?  Isn't that what she wanted?  After 10 minutes of the most dizzying conversation both my Mom and I said, "But you have Xanax?  We don't understand?"

Bottom line is that the Xanax is not working and they were so mad that we were not there to take him out of the home and to the Mental Health Department.  Turns out the VA does have an urgent care Mental Health Office that will take Walk-Ins.  So, I promised we would take him the very next morning.

When we arrived at the Mental Health office the next day, I was informed that they don't take walk-ins.  But here I was, young lady with a baby and a Dad with Alzheimer's and I told her that his home could possibly kick him out because of his behavior.  They took pity on us.  Plus Emry kept smiling at every person that passed by.  How do you say no to that?

We were seen pretty quickly and everyone was incredibly helpful and NICE.  That makes such a difference.  I gotta say, I'm really starting to Love the VA.

After we started going through all his medications, we found out that his Seroquel had been discontinued.  This drug helps with anxiety, sexual behaviors, sun-downers etc.  Dad had been doing so well on it and I have no idea why his Psychiatrist DC'd it.

(The psychiatrist it turns out has really screwed things up.  We had talked about discontinuing ONLY the Xanax at Dad's last appointment.  It looks like he did the Seroquel instead.  BUT, Valley View Gardens has hand-written notes from the Doctor saying that he discontinued the Ambien.  What the heck.  Get it together!)

Long story short, because I really could give much more detail.... we got that medication reinstated for now.  Although, when I got it refilled, they only gave us 10 pills.  So, now I need to figure out how to get more.  Plus, Valley View Gardens still needs a bunch of paperwork from the Doctor's.  So, I called Dad's Primary Care Doctor but they had no appointments until August.  This morning I called twice asking if they had any cancellations and viola! we got an appointment for 2:00 this afternoon.  I'm determined to get this all behind us, get Dad back on the right meds, and keep the peace with Valley View Gardens.

Below is a pic of Grandpa and Emry and a video of Dad.... 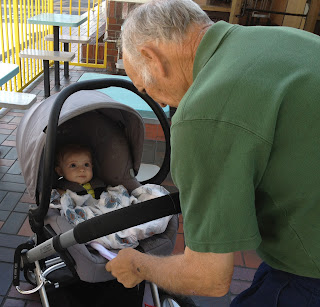 On top of everything else...

On top of everything that I just posted about Dad's aggressive behavior, I did hear back from the West Los Angeles VA home about a possible move-in date.  The facility did not pass the government survey, but has since made the corrections that needed to be made.  Apparently they are hoping to get the okay this week.  I have no idea when move-ins would start, but I found out that Dad is #13 on the list.  Here's the catch -- they are only going to take 1-2 residents per week at first so that everyone can adjust properly.  That means Dad wouldn't move in for at least 6 weeks from when they start moving people in... and we don't even know when that will be.

So let me sum up all the aspects of my Dad's life that stresses me out.  No Money.  No move-in date.  Aggressive Behavior.  Dad is jeopardizing the only good thing that he has right now: Valley View Gardens -- who have been more than accommodating with his budget and behavior.

Mom and I are going over there shortly to talk to them.

A Friend of mine also sent me a link to an article about Veteran's homes sitting empty... like the one my Dad is supposed to move into.  Click Below.
Veterans Homes
Posted by Kristen at 1:48 PM No comments:

Not good news today.  Actually terrible news.  We've been trying to get Dad's Xanax refilled because his behavior is becoming more difficult for The Valley View Gardens staff to deal with.  He won't cooperate to shower, or get dressed, or basically do anything that he doesn't want to do and he responds by trying to hit or punch the staff.  Megan and I both know that even though he is 72 and has severe Alzheimer's, Dad can still pull out that mean, scary side when he wants.  He even hit one of the pregnant staff members the other day.

The Xanax is taking forever because it was discontinued due to the fact that the doctor didn't want him on Ambien, Seroquel, and Xanax all at once.  So, I had to request that it be renewed, then it had to be refilled, and then it is supposed to arrive in the mail.  There is nothing I can do to speed up this process... we are in the hands of the VA, and that's how it's done.  Anyway, it still hasn't arrived, and his behavior is getting worse.

So, I got a call today requesting that I take him out of the facility and into the mental health department at the VA.  I'm not even sure where to start with this request.  First of all, where is the mental health department?  Will they just take a walk-in?  And what will happen to him there?  Are they supposed to keep him overnight?  I am trying to get Dad's psychiatrist on the phone who prescribed all the above medications and get his opinion.

I wondered why I was handling all this so well at first, but once I got off the phone after venting to my Mom, I burst into tears.  But it didn't last long because I stole a glance over at my 4 month old daughter Emry who was giving me the most sympathetic look... I swear if she could talk, she would have said, "It's okay Mommy."

Wait... Just talked to the Doctor while I was writing this and he says that taking him to the Mental Health Department will just result in them giving him a sedative or shot of Xanax and then releasing him -- basically a waste of our time.  He also says that the staff just needs to learn to deal with this behavior (which I agree with, but we don't want my Dad to get kicked out).  We have the okay to increase his dose of the other two medications until the Xanax arrives.  Apparently it was refilled last Thursday, so I don't know why it's taking so long to arrive...