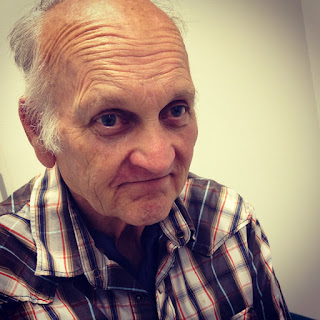 There has been a new development in the Alzheimer's Soap Opera that we live in.  The VA facility that Dad was accepted into called to ask for a TB test because they are hoping to open "in the next month."  (whatever that means...?)  But good news anyhow.  So, I took Dad to get a test.

When I picked him up two days later to get the test read, the staff at Valley View Gardens was convinced he had a new abscess on his arm, but once I once I looked at it, I knew it was his TB test.  Dad was going to test positive.

When I brought him to the Doctor's office, they confirmed my suspicion.  So, we have to go back on Monday for chest x-rays.  Dad tested positive last time he got the test, and they informed me that once someone tests positive, then they will always test positive.  So, apparently, we could have gone straight to the x-rays and skipped the whole test... That would have saved a couple trips, but now we know.

What we are worried about though, is what this means for his move-in date for his new home.  We're just hoping this doesn't delay things.  He most likely has latent Tuberculosis, which just means that he was exposed to it once, but doesn't have it.  Cross your fingers for good x-rays!

I just wanted to share the link to an Alzheimer's blog that I've been following recently.  It's a friend of a Facebook friend who writes the story of her Mom's ordeal with Alzheimer's.  I absolutely relate to this day-to-day observation of the disease... so many things that her Mom does are so similar to my Dad.  It's just nice to know that some of those strange habits or funny moments are shared... even across the pond (as they live in England).  I can't help but make numerous comments on her posts...
http://twosocksonefoot.wordpress.com/